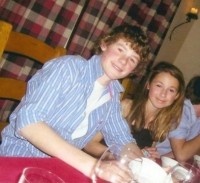 The third form concert was forthcoming and Mr Hills was advertising it in music as normal. Of course ryan and I weren’t listening as we didn’t really think music was our thing! Sometime afterwards he was round my house and I was just sitting playing my guitar when ry burst into song. The song of course we were both playing was Hero by Enrique Iglesias. After playing it once we were pretty chuffed with it and began to joke around saying how we should play it in the concert, we didn’t really sort anything out however until 3 days before.

It was three days before the concert when once again Mr Hills was advertising his concert and that’s when we realised if we did actually want to do something in it, we really should start practicing and submit our names! So, as he would say ‘for bants’ we did it.

However, like normal we didn’t really do anything about it as we liked to leave things to the last minute and it wasn’t until two days before when we realised we had never properly gone through it! So ryan ordered me to phone my mum and get her to bring in my guitar so we could go at break and give it a go. We then decided that we should get another person to play some different guitar to add to the song. So, as he was in our music class, we got rupps. We practiced a maximum of three times before the night had come that we had to play it.

“The song I think is symbolic and really sums him up”

Ryan had never sung in a concert or anything before, and I had never played the guitar in any concert before, so as you can imagine we were both shitting ourselves. Ryan was so terrified of getting a dry throat that he drank two bottles of water before we were up. After the long nervous wait, it was our turn. When we got onto stage the only thing that was in our minds was to do the song and get it over and done with, however this wasn’t to be. It turned out my guitar was out of tune so before we had started we had to wait for someone to tune my guitar! So there we were standing in front of everyone so I turned to ryan and told him to ‘keep the crowd amused’, but all he came out with was, ‘we are just tuning the guitar’ Thanks ryan, another awkward silence! But soon we were ready and we started. Everything flowed and we all got in to it, it was great fun. When we finished there was a big applause and you could tell we were all extremely relieved. All the girls in the audience of course loved it! Job done, it was a great experience and we all loved it.

Ryan was later told by Mr O’ Sullivan that Mr Hills had come up to him and mentioned something about him being one of the best male voices in the upper school. Of course this was not the last I ever heard of this!

The whole run up and evening of this song was great fun and of course one of the best memories I have of Ryan. The song I think is symbolic and really sums him up. He was of course everyone’s hero.