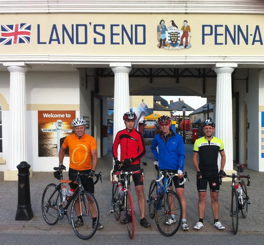 Nigel Turner [52] from Clevedon, his two brothers Mike Turner [46] from Keynsham and Jonathan Turner [47] from Birmingham with an old school mate Peter Scaife [52] successfully completed 1,015 miles in the saddle from Lands End to John O’Groats. Taking in over 69,000 feet of climbing they faced between 8-12 hours a day and on the way passed through some of the most beautiful countryside in the UK.Preparation for the ride started in earnest in February so that by the time we set-off, each of us had notched up over 1,000 miles in the saddle. Routes were researched ensuring we kept to minor roads, convenient friends or B & B accommodation close to pubs was booked, energy food was accumulated and support crew in the form of Nigel’s parents was enlisted.

Starting at 07.30 on a cool June morning we had no real concept of what lay in store for us. Sure we had read many accounts of what it might be like but here we were doing it for the first time. We completed the gruelling task 9 days later at an average speed of 14.6 MPH finishing at 9pm on Saturday 2nd July 2011.

Our routine meant a reasonably early start but not before we had taken on board a full fry-up breakfast. We then tried to get some early miles in (normally about 40) before we stopped for our first major stop of the day – a suitable café. Americanos all round and plenty of cake and then back on the saddle until we met up with support for a good long lunch – BLT’s were the favourite and any other high calorie foods that we could stuff down. After about an hour it was time to get going again until the all-important time for tea with more cakes! Ideally by then we would only have another couple of hours of cycling left but some days it wasn’t like that and on three occasions we were rolling in as late as 9 o’clock.

Over the nine days we were lucky enough to see some of the most fantastic landscapes and ride on some of the quietest roads. We were incredibly lucky with the weather and whilst did we have some rain; it managed to confine itself to one torrential downpour so we got soaked to the skin but then we dried off again.

We met many cyclists doing the same thing and it was great to swap stories and in one case to help them on their way.

As an experience it ranked with all four of us as one of the greatest nine days of our lives. Hardly a cross word was said, we laughed at each other’s discomfort, we revelled in our male company and we ended up fitter than any of us had been or ever likely to be again!

To complete this ride was a great achievement but to donate over £2000 to our friends John & Michelle Bresnahan on behalf of Ryan and his memory made the pain and sweat even more worthwhile.

Nigel would like to thank all friends and family for their support and donations for this worthwhile cause. The boys all had an immensely enjoyable week with no mechanical issues and only one solitary puncture between them.